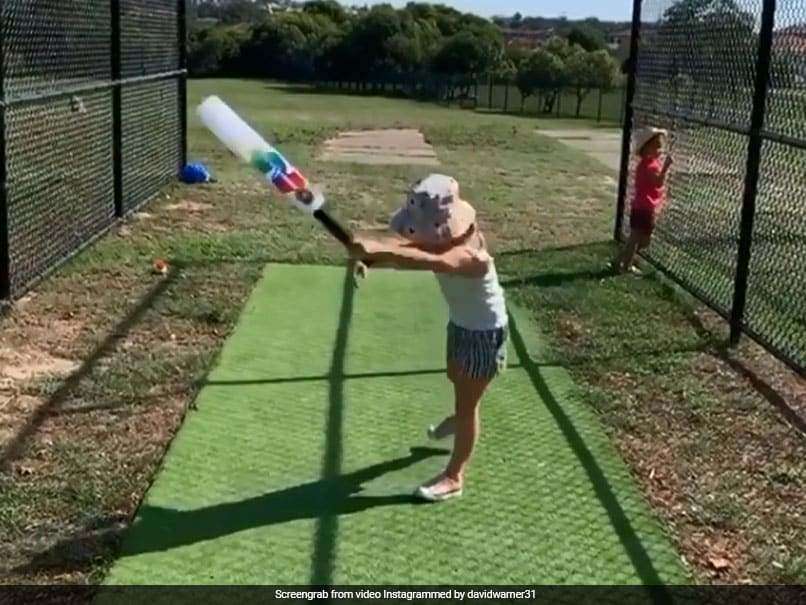 David Warner is quite active on social media when it comes to posting videos of his daughters. Numerous times he has posted videos of his daughter Ivy trying her hand at cricket. On Monday, the Australian opener took to Instagram to post another video of Ivy playing cricket. However, Ivy didn’t seem too pleased after she failed to make connection with the ball. She slammed the bat to the ground in anger and walked off with David Warner summing his daughter’s angry reaction with a hilarious caption, mocking himself.

In the video, Ivy can be seen facing a delivery, but she misses it completely. She then screams “nice spinning” before slamming the bat and staging a walk out from the nets.

Warner posted the video and captioned it: “It’s fair to say Ivy needs to listen and control her emotions. What would dad know”.

Warner was last seen in action during the three-match One-Day International (ODI) series in India.

After scoring a scintillating 128 not out that helped Australia rout India by 10 wickets in the first ODI, the Australian left-hander failed to make an impression in the next two matches, registering scores of 15 and 3.

India fought back from being 0-1 down in the series to win the second and third ODI to clinch the three-match series 2-1.

India re-asserted their dominance at home once more, avenging Australia’s come-from-behind win in the ODI series in India before the 2019 World Cup.

The T20I series begins on February 21 at the Wanderers Stadium in Johannesburg while the ODIs will be played from February 29.

February 7, 2020 0
Watch the final over of England's innings in the ICC Cricket World Cup final 2019 before the super over. The home of all the highlights...

“Over to you Virat” | MS Dhoni lets Virat Kohli finish...

Glenn Maxwell Ruled Out Of South Africa Series Due To Elbow...